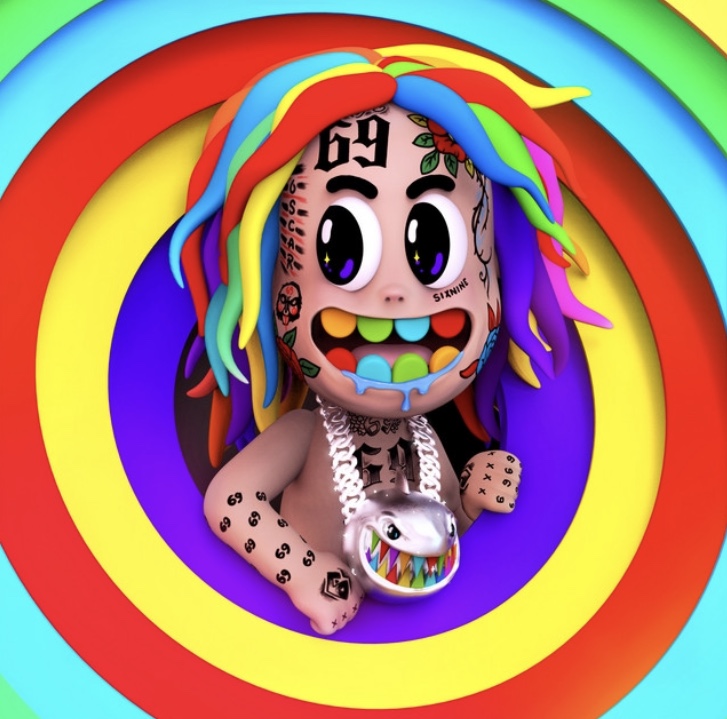 TattleTales is 6ix9ine’s first project since he was released from prison and I don’t know how to feel about it. I want it to be like Day 69: Graduation Day or especially DUMMY BOY but I feel like 6ix9ine’s time has come up since clout isn’t a huge thing anymore. The promotions for this album were associated with the typical trolling and releasing of a series of singles that didn’t do good numbers then watching 6ix9ine throw fits about how the industry doesn’t want to see him win. The singles that released prior to the albums release are all different so I don’t necessarily know where this album will go, will it be good with the versatility? Will it gain the attention from fans? Will it be full of that high energy that he’s known for? These are the questions I’m asking and hope he delivers. Let’s get started and let’s get this over with because I have bad feelings about the music.

“LOCKED UP 2 (feat. Akon)”– This track here samples Akon’s 2004 hit “Locked Up” but it’s more of a 6ix9ine remix since it shares the exact same beat and lyrics from Akon. This is a good opener to this album and caught me off guard since it’s something I haven’t heard 6ix9ine over this kind of beat before, it’s a very nice change and Akon is also enjoyable to hear.

“TUTU”– I don’t like anything about this track here. The production is really out of the normal for 6ix9ine and so is the way he raps, he’s trying to be too harmonious which is something he’s never been good at in my opinion. There are no redeeming qualities to this track.

“GOOBA”– This was the first single that 6ix9ine released once released from prison and it took over everything. I did a review on this track so if you want to read it then go ahead and look up “GOOBA” and it’ll be the first result. I still enjoy listening to this track for the high energy and infectious beat.

“WAIT”– I’m a little indifferent with this track here because it’s going in the right direction but doesn’t really meet the expectations that I had. The production sounds like something Gunna would be on which is something I don’t want to hear associated with 6ix9ine since Gunna does it so well. I don’t really vibe with this track since it sounds forced and very absent of energy. Undisputed skip for sure.

“CHARLIE (feat. Smilez)”– This is one of the few tracks that has potential and I feel this way because of the production style and the way 6ix9ine raps over this production. The feature is something that I find very boring, not sure who this is and I personally don’t want to find out anymore after this track. This definitely isn’t the worst track yet but it’s still not the best by any means.

“TROLLZ (with Nicki Minaj)”– I do believe that this was the second single that was released after 6ix9ine was released from prison and I actually didn’t give it a full listen when it released, I just heard snippets over social media. I like this track mainly for Nicki Minaj’s appearance but other than that 6ix9ine brings decent energy but not enough for me to fully enjoy the track and plus the production seems to only be kicks, high hates and a weak 808 structure.

“NINI (feat. Leftside)”– Yeaaaaaah I’ll pass on this feature, surprisingly I enjoy 6ix9ine on this track, his voice just sounds good and I don’t know how to explain it but it’d enjoyable, one of the few enjoyable moments from the album. I enjoy the use of the 4 count beat throughout the duration of the song, good way to make it catchy and easy to listen to for the listener.

“PUNANI”– This is the equivalent to WAP. I never want to listen to this ever again, I feel absolutely repulsed with the lyrics which is bad because I hear bad stuff like this all the time, this is just on a different level of nasty. Easy skip.

“YAYA”– …….Another pass. The production is horrendous and too chaotic for my liking. I enjoy the Spanish lyrics and the versatility there but as far as the song goes this is god awful.

“LEAH (feat. Akon)”– I’m genuinely convinced that Akon is the best part of this album. What in the world is 6ix9ine on this track “she wants to take ecstasy pills, she wants to have sex with me for real” what is that even. Tracks like this make me mad and only for how bad it is, the auto tune 6ix9ine uses is god awful too. Akon is the only good thing about this album so far.

“GATA (feat. Lil AK)”– “ray charles John cena sh*t I can’t see the bi**h” WAS USED ON HIS ALBUM DUMMY BOY!!! Hands down the worst album I’ve ever heard. Akademiks needs to stay on everyday struggle and not on 6ix9ine’s album.

“GTL”– ……..this is the first track done over again but over a jail phone to make you feel bad for 6ix9ine and to give the album more depth but it does absolutely nothing in my eyes.

“AVA”– Thank god we’re at the last track because I don’t know how much more I could have taken. Thank you Ronny J for making one of the only beats that I like but 6ix9ine found a way to ruin it. This isn’t as bad as everything else but it’s still not great by any means.

Long story short, Akon is the best part about this album. This is more than likely the worst album I’ve heard all year long. There is no structure, no lyrical structure, no attention grabbing production, no style, no flavor behind the music, this is such a bland and uninteresting project by 6ix9ine. The one thing it may have is versatility because it just goes all over the place but that can also be considered a bad thing since he doesn’t stay with one sound and will do something completely different between two tracks. This just isn’t good at all and I don’t recommend anyone to listen to it, it’s just a waste of time honestly. 6ix9ine is good at promoting his music but what’s the promotion if the music sucks, next time he releases music he needs to take his time and work towards a goal and not to just put music out because that’ll ruin him in the long run, no wonder why he’s out 100k sales, this is just awful. I think this project is deserving of an undisputed rating of 2/10.

Thank you all for coming back to my blog to read this post. I enjoy making posts like this because it’s fun to go in and critique the music. I hope you all enjoyed this post and definitely make sure you come back tomorrow for this week’s Throwback Thursday Post, it’ll be a special one.