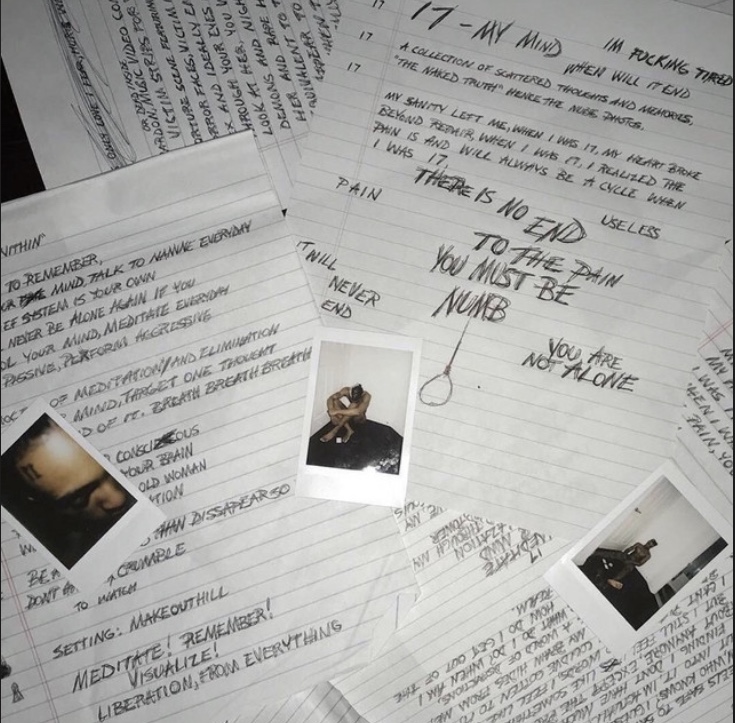 I think the pattern of these Throwback Thursday Posts will be two albums that have released within the last 10 years and then one album from the 70s-00s, I’ll follow this pattern to really get a grasp of as much music and I possibly can from all genres and different time periods. Last week I did Led Zeppelin so now this week and next week will be fairly current albums but this weeks review is about a special album.

This week I will be covering 17 by XXXTENTACION, for the sake of the review I’m going to call him X. I’ve been very vocal about X over the last year of these reviews and how his music opened my mind in many different ways, it goes Travis as my number one and X as my number 2, this project is extremely important to me in many ways so let’s get into it so I can explain just how important it is.

“The Explanation”– Since this is the first real project of X’s mainstream career this was a different approach to an album, I’ve never heard an introduction to a project like this. X starts off the album with listening instructions and a brief explanation behind the meaning of “17” and what it means to him. When I first listened to this I was with my best friend, we are both impacted by music and value it’s power so we listened to this together, in the dark, by ourselves, it was an experience that I value highly with this person. I took this introduction very seriously and took this album very seriously because I felt a connection to X during this introduction, I was excited when I first listened to this album and that excitement still carries on.

“Jocelyn Flores”– The track starts off with this gorgeous sample of a person singing, the internet being so obsessed with this found out who the mystery person was and it’s an artist that goes by the name of Shiloh Dynasty, he is very silent with his career but is appreciate by millions. This is without a doubt X’s most popular song coming in with 1.1 Billion streams on Spotify alone…1.1 B I L L I O N. The thing that I feel makes people love the song is how smooth the start of the song is, it starts off with an effect over the production that makes it sound scratchy like a record player but then transitions into this very smooth beat with soft 808s and a soothing guitar all with gorgeous vocals from X, this then transitions into a very deep and painful verse talking about suicide and about the person that this track is named after, Jocelyn Flores was a real person who met X but killed herself shortly after, that’s at least what I know from stories. The track is smooth, calming, deep, emotional, etc. what more could you ask for.

“Depression & Obsession”– At this point in X’s short career I’ve only really heard the screaming and high energy music he made so all this singing was different to me but I loved it deeply. This track has gorgeous and very soft vocals, X always found a way to make his voice sound empty, I don’t know how to explain that but X just expressed his pain so well through his music. The track itself has little structure with it only being consisted of vocals and an acoustic guitar but this is what makes it so excellent, he doesn’t need professional production and all sorts of structure to make great music, just two things, his voice and a guitar.

“Everybody Dies In Their Nightmares”– This is another fan favorite by many because of its resemblance to “Jocelyn Flores” in the way that it has a different sample but from the same person, Shiloh Dynasty, and is built the same way, it starts off really quiet and soft but then the 808s and various percussion enters the track along with some rapping from X. The track is filled with depression and meaningful lyrics which is what this album is full of, it adds more structure to the track as a whole and fills it up with plenty of emotion that the listener can connect with. Later on in his career with his ? (Question mark) album there are tracks there that resemble this one like “the remedy for a broken heart (why am I so in love)” the fast paced flows on both tracks resemble each other a lot. Without a doubt this is still one of his best tracks and gives people like me comfort.

“Revenge”– My reaction to this song was funny the first time I ever listened to it because I was only used to the screaming and super aggressive X so when I pressed play to this song for the first time ever and heard an acoustic guitar I was very confused but I loved it. The first lyrics I heard were “I’ve dug two graves for us my dear” and it caught my attention right off the bat and drew me in because I was curious as of where he was going to go. This is probably one of my favorite X songs to sing to because the vocals are full of a lot of pain and emptiness. In the end of the song when X sings over and over again “In the grave I’ll rot” this is a good example of the amount of pain in X’s voice, you can just hear his pain and connection to the music while singing.

“Save Me”– I would love to say that this is X’s most depressing song in his mainstream career but I’m not sure, it’s up there though. The entire track is one big suicide note in my opinion, the lyrics are dark and demented but they are misconceived in my opinion because they are delivered with a gorgeous chorus and soothing melody. X delivers these calls for help with such melody, it’s almost like he’s not doing this for an audience because he isn’t ashamed for how he feels and what he says, it’s just gorgeous all around. I felt and still feel an overwhelming amount of empathy with this track, I never wanted to kill myself but I definitely know what it’s like to want and call for people but no one seems to listen, truly a masterpiece.

“Dead Inside (Interlude)”– This is a very raw track in the sense that it isn’t recorded naturally, it sounds like a recording on an iPhone in the studio, this element of music making is in my opinion as raw as possible. The lyrics are deep, dark and meaningful which is what we’ve gotten so far in the project, this track isn’t that much of a fan favorite and isn’t a personal favorite but I enjoy it for its place and significance in the album because it plays a big part in the story of the album.

“F**k Love (feat. Trippie Redd)”– This track right here broke so many records after his death and currently sits at over 790 million streams on Spotify alone and another 200+ million on SoundCloud. I will forever love this song for the meaning and for the gorgeous melodies used not only from X but from a Trippie, it’s just unexplainable and can only be appreciated. I wish I could go back to the first time I listened to this because it made me feel whole and complete, it made me feel comfortable and understood, it made me feel good. Like I said, this is one of those special tracks where I can’t speak on it because it’s just so amazing, it’s an experience.

“Carry On”– This is another track with a sample from Shiloh Dynasty and is probably one of the more underrated tracks off the album in my opinion. I really enjoyed the vocal effects on the track, X’s voice is constantly pitched down, I’m not sure what the meaning is for it but it sounds amazing, that and the lo-fi type of production we get on the track. As far as the lyrics we get the same messages and emotion filled lyrics but this ones feels a little different because he’s talking about masking emotions and acting like nothings there just to progress with his life, he feels obligated to forget emotions so he bottles them up and throws them away which is never a good thing to do, that’s what I got from it at least.

“Orlando”– The production on this track is minimal and simplistic but does an amazing job at conveying the right amount of emotion that X is giving through his voice and lyrics. When X sings “waste of tears, waste of years and months” I felt really upset for him because no one should feel that way at all, I felt extremely sympathetic for the guy. The lyrics on this track are probably the most concerning and heartbreaking, it’s hard to talk about because when I first heard this track I got overwhelmed with all different emotions and whenever I listen to it now I get flashbacks to when I first listened to it.

“Ayala (Outro)”– For anyone who doesn’t know X suffered false accusations from his X girlfriend who’s name was Geneva Ayala, see where the title comes from. The track is short and ends the album with a topic we really haven’t gotten yet in the album and that topic is about the person who gave him all this negative feelings we’ve heard all throughout the album, he touches on the feelings she left him very briefly on this track with the lyrics “She showed me things love can’t forget, Oh, now it hurts, ah, made a list of my regrets and you were the first love, ah”. It’s a great track and a great Outro to this short but wonderful album.

I always say that Travis Scott gave me a way to feel comfortable about myself and gave me the confidence I have in myself today but X gave me the ability to understand my inner self, he told me it was okay to care about my mental heath and to escape the void that is your mind. At a point in my life I had no one to talk to, I was alone and in my own head but after time I got out of it and learned to manage my feelings and to control myself as a whole but I definitely couldn’t do it without X as a musician and as a person. I will always love, appreciate and remember X as a person before an artist because his person and character is what changed me and made me feel understood and comforted, when he died I felt like I lost an inspiration, a public figure, a friend, but I’m a firm believer that the body is the house of the soul and all the energies that make a person who they are so when he died I understood that his energy was amongst the world. I’ll always appreciate this project and my first time listening to it with my friend who also appreciates it. More X projects to come in the future.

Thank you for being here for this weeks Throwback Thursday Post it was definitely a special one to me. I can’t wait to do more X projects in the future giving how important he is to me. If you want more posts like this then like the post and follow the blog!!! See you here next week for another Throwback Thursday Post and come back tomorrow for a review of and artist that I’ll be reviewing and listening for the first time ever.