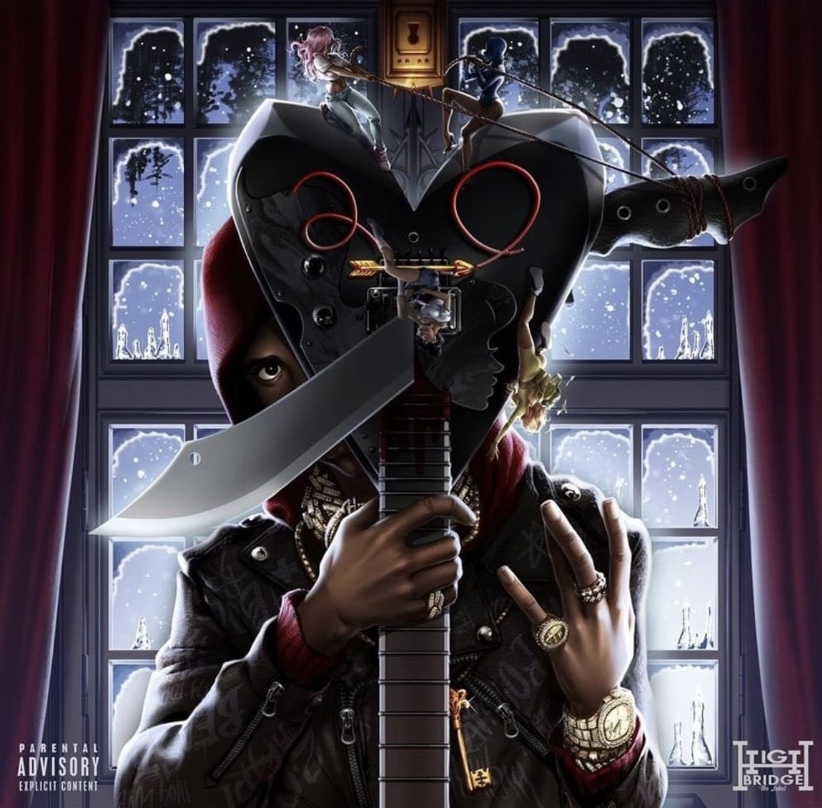 A Boogie Wit da Hoodie has been an artist that I’ve wanted to like for so long, since he blew up but i could never get into his music, it was really hit or miss with him. I had such high hopes for the album, for some reason i felt like it would solidify my opinion on him because Hoodie SNZ wasn’t enough fo me to make a final opinion on him and his music. Like i said, i have high expectations for Artist 2.0, so, did A Boogie live up to them?

The format of this post will be broken down into the topics that i want to talk about and also the things about this album that i find extremely impressive and well done. Since it is 20 songs i wont go song by song like how i normally do because i don’t have the time, patience, and space to do so. I will start off with the flows, cadences, and melodies he uses on this album, then go to the features, the production, the songs that stuck out the most and why they stuck out in my opinion then finishing up with some final thoughts.

The first thing that caught my attention was his extremely wide range through his flows and his voice, i knew he had a very nice voice but i didn’t know that it was 20 songs good if you know what i mean. The first 5 songs were enough for me to determine that this album wasn’t going to be anything like he has made before for example “Thug Love” is such a great opener to this album and it definitely sets the tone for what all these other tracks will sound like, pure harmonies, perfect cadences, and fantastic flows, water like. On tracks like “Cinderella Story” “Another Day Gone (feat. Khalid)”, “Good Girls Gone Bad”, “Blood On My Denim”, and “Streets Don’t Love You” we get A Boogie borderline singing and basically flexing on his vocal range also with his capability to harmonize, these are songs that i love because he makes the track enjoyable by making it catchy through his harmonies, different flow choice, and his usage of different cadences to make everything stick together. I would give A Boogie a perfect 10 for his versatility on this album, i absolutely love it.

I always say that it takes a certain talent to use a feature to an artists advantage, and this is very true. I have heard terrible features from artists that are fantastic because of the artist who got them for that feature on that song all because they don’t know how to use them properly and to their advantage. Going in order i will talk about each feature and what i love best about it. Starting with ” Might Not Give Up (feat. Young Thug)”, first of all Young Thug is hard to mess up a feature with, an artist needs to know nothing about Thug for his feature to be bad but A Boogie uses him perfectly, he makes him apart of the track and not just a feature which is impressive to see, instead of putting him on the track he makes him more involved by adding melodies and harmonies. This beat also fits perfectly for Thugger, nice guitar and nice drum line, the perfect beat for a Young Thug feature. The next song is definitely my favorite and the best on here for the usage of the features, “Numbers (feat. Roddy Ricch & Gunna)” it would be impossible for this track to be terrible, A Boogie was featured of Roddy Ricch’s most recent album which was my personal favorite track, they both have such great chemistry together and throw Gunna in the mix of that and you’re certified a platinum record in my opinion. But he utilizes them perfectly with this beat because this beat has the same style that Gunna and Roddy would have on their tracks. The next feature is a DaBaby feature on the track “Stain (feat. DaBaby)” and its an alright feature, one of my least favorite but still a good feature, i see why he is featured, possibly for streams but still it is a good track with a solid feature from DaBaby. I have nothing bad to say except that his feature sounds like a recycled flow but thats just how DaBaby raps. The next feature is from an artist named Trap Manny and it is on the track “Hit ‘Em Up (feat. Trap Manny)” and although i may not like the artist that much, i really enjoy the feature because i feel that the beat fits perfectly around his voice, this feature doesn’t save the track but it makes the track more worth listening in my opinion. Summer Walker makes an appearance on this album which is good to see because i enjoy her music, her album was very enjoyable to me but her feature was perfect on “Calm Down (Bittersweet) [feat. Summer Walker], her vocals are so soft but so abrasive at the same time which doesn’t come around too often with singers, more with RnB artists actually. This is one of my favorite features because her singing played over top of A Boogies second verse makes it more sentimental and stronger to me, all of this is happening on a wonderful London On Da Track beat. Another one of my favorite tracks “Another Day Gone (feat. Khalid)” is an obvious favorite in my opinion, the guitar, the subtle 808s, percussion, and Khalid feature all mixes well to make a perfect track. They both did amazing on this and are great collaborators. The last two features are both from Lil Uzi Vert which always does his thing with features, he doesn’t deliver bad features in my opinion. He does a fantastic job on both “Luv Is Art” and “Reply” which was one of the singles that released prior to the albums release which was good then and is still good now. But Uzi does his thing as always, cant ever complain about Uzi. I am super impressed with all the features and with A Boogie more for the fact that he orchestrated these features and made them good through his directing skills and being in command of hi sown tracks, not too many features also, the perfect amount for a 20 track album. Another 10 for the features.

Next is the production. The production all throughout the album has a lot of similarities in the sense that 13 of the 20 tracks have some string instrument in the beat making process and a good amount have a piano in the beat as well. The usage of guitar in the beats is a good move for A Boogie because his voice sounds so good around a guitar so that is a huge reason why this is so enjoyable because he is doing what he wants but also he is doing what he know the people want to hear. The production is amazing, i have no complaints at all, the beats are all made to support A Boogie and his voice, rapping style, etc. He gets producers like London On The Track, Murda Beats, Hit Maker, etc. to produce a lot of these tracks which is a good move because these are seasoned producers who know what their doing so he could totally trust them all with the task of really detailed and “classy” beats for his album. I don’t have much else to say except that the production is a definite highlight for this album and one of my favorite reasons for listening.

Some tracks that really stuck out in my opinion is obviously the intro track which i already explained earlier on in the review. “Might Not Give Up (feat. Young Thug)” is another stand out track for so many reasons, the production fits Young Thug and A Boogie perfectly, the feature is utilized perfectly and all in all it is just a super catchy track. “Numbers (feat. Roddy Ricch & Gunna)” is another stand out track because well for the first reason the beat gives me strong western vibes because in the beginning we hear a wolf howl and the guitar used is something that sounds like it came straight from an old western movie, also the fact that the three artists on this track flow effortlessly and all feed off of everyones energy. They also all bounce back from each others verse in and out of each others which is an extremely talented thing to do in my opinion. “Calm Down (Bittersweet) [feat. Summer Walker] is another stand out song for reasons that i mentioned prior to this part of the review, the feature is wonderful and the production works perfectly for the both of them, outstanding track. I have talked about “Another Day Gone (feat. Khalid)” a few times during this review and for great reasons, A Boogie tests his harmonies and vocal range a lot on this track which is good to see when he is put toe to toe with someone like Khalid, they both feed off of each other energy and it is apparent to see and the final product is perfect to me. A Boogie gets a little deeper than usual on “Blood On My Denim” which is a reason why i love this track, he really knows how to capture that emotion in the music and in the listener just by using his golden harmonies to convey a deeper message. “Right Back” has a really nice and light hearted feeling to it, it also reminds me of a classical song because of how the piano is played, almost like it would be played at a classy bar in New York in the 60s, thats pretty specific but thats what this track reminds me of. “King Of My City” is a perfect New York anthem in my opinion, the way the track is delivered just sounds like an ode to his upbringing and how New York sees him, also why he deserves to be called the king of his city. The last song that stands out to me is “Streets Don’t Love You” because of the same reason for “Blood On My Denim” but this track is way more sentimental and deep than any other track on this album. A Boogie gets rally personal with friends that are locked up and their life story along side A boogie also bringing up friends who have passed in his life, a very sentimental track to finish an excellent album.

To finish this review up i will briefly give my final thoughts. Artist 2.0 was a perfect album to me which is odd because i didn’t expect it to be such a good album. This listening experience solidified my view on A Boogie and made me a fan, I’ve been iffy about him as an artist for a long time but this proved to me why i should pay attention to the artist known as A Boogie Wit da Hoodie. I would easily rate this a 10/10 for so many reasons, it is EXTREMELY RARE for me to like an album that is so long and from an artist that i don’t have much of a connection with, this is actually probably the first album that i ever listened to that i loved right away from an artist i felt indifferent about. I am extremely impressed with A Boogie and would be happy to add this to my favorite albums of 2020 list.

Thank you for being here for another week of posts, we have a great week this week and i am so excited to share my thoughts about the next 3 albums i am reviewing, but, as always make sure to share this page with someone and to like, comment, and follow this page, see you soon!!!!