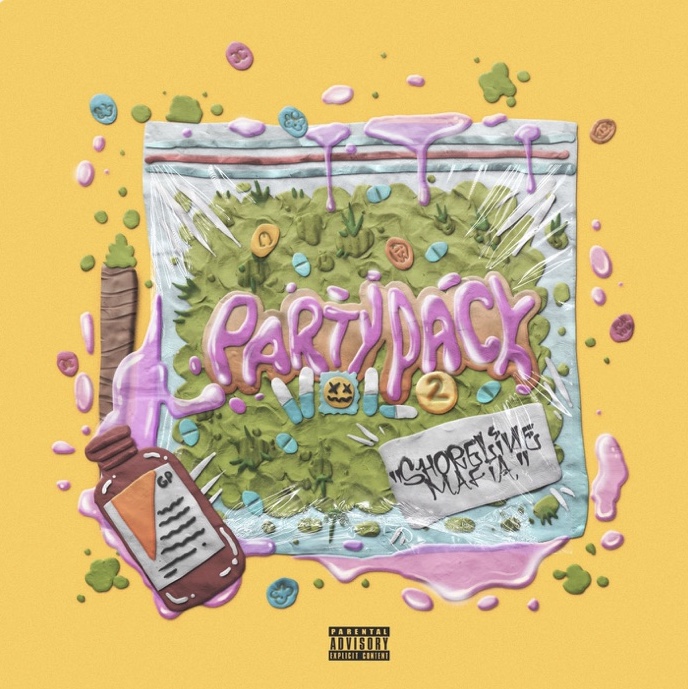 This is another special post because it is my second recommended post, that means that some of you have given me an album to listen to and post about, I love doing this because not only does it give me something to post about, but it gives me something new to listen to and to give an opinion about, so if anyone has anything they’d like to share with me then by all means send it to me and let me know about it. This post we have two albums to talk about, one is a booming rap group from California and the other is a pop singer also from California. Lets get into this post.

This album is titled Party Pack, Vol. 2 and it is by Shoreline Mafia. I haven’t heard so much about Shoreline Mafia so this will be my first listen as well. Going into this project I didn’t know what to expect except for a distinct West Coast sound which a good majority of West Coast rappers have which is either a funky synth chord in their beat, funky 808s, 4/5 count start in the beginning of the song, and some more but I can’t think of it really, but I was expecting a lot of this and to my surprise I didn’t hear a whole lot, the last two songs do have that 4 count start and some of the songs do have a rather “funky” 808 in the beat thats sort of hard hitting but besides those I was surprised to hear what I heard. The project really isn’t anything special and I don’t think its supposed to be anything special besides what it says in the title, “Party Pack”, nothing more, nothing less than party music, its here to get us hype and entertained and they do a good job at it, now some of the songs I really don’t like but for the most part they are ok, they’re alright. I think “Wings” is the best song on here because the beat is the most different, it has a harmonizing voice intertwined with it which I like, it reminds me a lot of the Mustard song “Pure Water” but I also like “Fell in Love”, “Mind Right (feat. Warhol.SS)”, “Half N Half (feat. Mac P. Dawg)”, “Pour Two 4’s”, and “Free Drakeo, Free Greedo (feat. Band Gang Paid Will)”, they’re alright tracks, nothing really stands out except the fact that they sound pretty good. The features are alright as well some of them are people that I’ve heard of like 03 Greedo and Warhol.SS, the features don’t really help or hurt any of the tacks which is a good thing if artists can do that, you never want a person on your song that makes it bad, or does better than the person who’s song it is, it should be there just for support and thats what these features are. Overall I would give this album a 6/10, possibly a 7? i’m not totally sure, I like it but not as much as I would think.

Now when I had looked this album up I noticed that there were 20 songs but 10 of them are the actual songs and the other 10 are the same songs but an acoustic version so i’m only going to be talking about the first 10, the non-acoustic versions. A couple months ago I had seen and heard the song “prom dress” and I thought it was nice but that was all that I listened from her so this would be my first time listening to mxmtoon’s album. I did a little research on her and found out that a bit of her music has a guitar or some sort of string instrument and the string section of instruments are my favorite, violins, ukuleles, guitars, bass guitar, acoustic, cello, etc. I just think that these are some of the best instruments in sound. For the most part I really like and enjoy the entire thing, the songs are very calming, easy to listen, very easy to vibe to, and i think its very beautiful like songs like “prom dress” and her “failed prom story” whether that is her own experience or a story, its still very good song writing. All of the songs have such a good vibe and make me feel good because of the use of guitar type instruments, on “suffice” it has one of my favorite guitar riffs on the album, the same thing for “blame game” I just love the tempo and the speed of the guitars. Her melodies are perfect and they match well with the instrumentation on the songs, but one of the more interesting songs in my opinion is “my ted talk” and I think this one is different from the rest because she starts off talking to the listener about her experience with a therapist, I enjoy this from artists for some reason i’m unsure of, but throughout the song its easy to hear what she’s saying because she’s purposely trying to be direct with the listener and thats amazing to see artists do, it enhances my view of their artistic value and creativity. This is a wonderful album, it sounds good, the energy is great and pure, she has real talent, she should be bigger as an artist, I feel like when she releases again I will definitely listen because I love this album right here. I would rate this a good 8/10, It could potentially get a higher score but id need it to sit with me for a while.

I love doing these recommended posts because I get to make good content and I get a new person to listen to which I think its a win win scenario with you and I, this upcoming Friday/Saturday we have a special week, we have a new DaBaby album which I am very excited for, Kevin Gates, Young M.A. but, no Kanye West, Kanye West called off his new album once again, not surprising but come here when it drops to see what I think along with all the albums releasing this week. Thank you, like, share, comment, and follow, I appreciate anyone and everyone who reads these, it means a lot. New post in a few days.